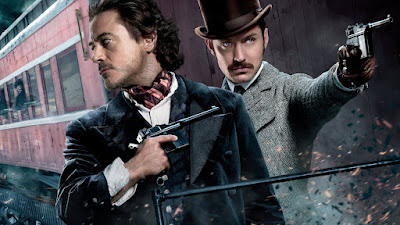 After the success of Sherlock Holmes (2009), Warner Brothers joined hands with Guy Ritchie to shoot Sherlock Holmes: A Game of Shadows.  The film was shot at various locations in different parts of London like the Richmond Park in Southwest London, Victoria Bridge, Hampton Court Palace as well as a few scenes in the Royal Naval College of Greenwich.  A few scenes were also shot in Strasbourg Cathedral in France.  These were the opening scenes of the film. Here is a review of the movie – Sherlock Holmes : A Game of Shadows.

Sherlock Holmes: A Game of Shadows Movie – Music By:

The music and soundtrack for this film was produced and composed by Hans Zimmer. The soundtrack was released on December 13, 2011.

Sherlock Holmes is definitely the brightest man out there…so far. There exists a unique villain mastermind at large-Professor Moriarty -and not simply is he intellectually equal to Holmes, but his ability to do evil, together with a thorough absence of conscience, could possibly offer him an edge above the distinguished detective.

After the Crown Prince of Austria is discovered dead, the signs, as interpreted by Inspector Lestrade, indicates suicide. However Sherlock Holmes finds out the fact that prince was murdered-a killing which is merely a single bit of a bigger and even more portentous puzzle, created by Professor Moriarty. The shrewd Moriarty is usually a step ahead of Sherlock Holmes since he spins a web of destruction and death-all portion of a larger master plan which, if he triumphs in, can change the path of history.

In this sequel of the Sherlock Holmes film, the battle between Moriarty and Holmes has been very wonderfully created. With whacky humor and captivating conversations, this film is definitely a wonderful entertainer.

The film fared well but not as good as its predecessor. Sherlock Holmes which was released in 2009 and was a prequel of this film made $24.6 million in the Box Office on the opening day and $62.3 million in the first weekend, both these sums being remarkably more than Sherlock Holmes: A Game of Shadows.